The need to outdo what you had previously accomplished is standard human nature and is quite evident in the work ethic that most of us share whether we are filmmakers, musicians, doctors or construction workers.  It is on display that can be seen with each film that had been unleashed from the minds of those that proudly produce motion pictures at Trash Film Orgy Productions.  How does one follow-up a much loved movie called Planet of the Vampire Women?  It was this very question that I posed to cinematographer and co-founder Christy Savage back when the year 2012 was still fresh and some believed that Mayan calendar would spell the doom of humanity.  Christy Savage stated, “Darin wrote the scripts.  We have always been fans of Blaxploitation and monster films. We are huge Lovecraft fans. Take a little bit of Blaxploitation films from the 70’s and a little bit of Lovecraft. It’s like Shaft versus Cthulhu! There are a lot of monsters in it and there is a lot of action in it. It’s going to be super, super fun!”1

Badass Monster Killer was filmed entirely within the walls of a modestly sized nondescript warehouse located in an industrial section of Sacramento which they had dubbed Warehouse 35. The world of Badass Monster Killer would demand the creation of an alternative world that the T.F.O. filmmakers had established in past productions such as Monster from Bikini Beach. They have called this world-Camaroville and one can look to films such as Cool World and Sin City for reference. It is because of the need to create a stylized sense of reality that the filmmakers had decided to completely film the motion picture against a rather large green screen which allows for extensive post production computer created environments that would further stretch their modest budget to the limit.

During my first visit to the Sacramento set I was entertained by the audition process. The trio who are at the heart of T.F.O. Productions-Amy Slockbower, Darin Wood and Christy Savage had put out a call for actors to audition for Badass Monster Killer which had not been named during my initial February 2012 visit. They had decided to film an impressive amount of local Sacramento talent in a number of scenes to gauge chemistry and analyze if the actors would fit the bill of what they were looking for in certain roles. As in life, bonds will be created during filming and director Darin Wood had obviously bonded with a number of actors over several films. Actors such as Jawara Duncan, Stephanie Hyden and Stephen Vargo had already been cast, but Badass

Monster Killer would have need of a number of actors that would be culled from the area. Auditions are akin to live theater without a paying audience. I had witnessed a fine number of actors emote and read through scenes and did not envy the job of actually selecting whom would be picked to be in the film. If T.F.O. Productions decides to produce a special DVD edition of the film then I would recommend including many of the auditions because it would make for a fascinating and intimate look at the making of the film. Successfully cast that day were such actors as Chester Lee Patterson, Amelia Belle and Ryan Cicak among others.

On the set of the film the green screen dominates the warehouse space, but merely hanging and stretching green fabric does not magically bestow filmmakers powers to create a masterpiece. The crew of T.F.O. Productions was very well aware that the world they needed to create must match actor’s sight-lines and there had to be a tangible physical world created as well. There are many talented carpenters and engineers that had created set pieces that were built upon wheels so the sets could be mixed and matched in a variety of ways that essentially and cleverly created the visual illusion that a variety of environments were created. These set pieces which included an altar with an eye, a club with a bar and a stripper pole were created even throughout the casting process itself as those who can attest to having worked on micro budgeted films do know that time is a luxury that will never be squandered on a day or night when any portion of the production needs to be completed.

The subject of financing and how to pay to make a motion picture is one that will continue to haunt filmmakers right down to post production. T.F.O. Productions raised funds in a variety of clever, traditional and sometimes nontraditional methods. Funding a production by appealing to the public is now an established and an often successful way to raise funds. Indiegogo was used by T.F.O. Productions to raise the initial capital, but Christy Savage, Amy Slockbower and Darin Wood go beyond that source in their quest to fund their motion pictures. The trio is incredibly adept and inventive in

creating shows that they are certain will appeal to their base audience as well as attract new fans to their product. T.F.O. Productions have created live events that incorporate burlesque, an unabashed love of theater, live musical acts and unusual and horror inspired beauty contests. These events have also contributed to the making of Badass Monster Killer and have served to continue to keep the fan base interest at a feverishly loyal level. Each of these events have been quite well attended and fans have been treated to bloody bikini contests, bloody wrestling and other eye-catching events that have had a uniquely original T.F.O. Productions spin that have made them memorable.

Filming began in earnest within the month of May in the year 2012. Initial funding proved successful to a point as the filmmakers would continue to raise funds with many of the aforementioned events throughout filming and post production. A Canon XH-A1s was exclusively used throughout the production. Multiple angles and takes would be the standard to push T.F.O.’s modest budget to the limit and create a look that the contemporary cinema-goer is accustomed to in viewing motion pictures. Filming would be accomplished to accommodate everyone’s schedules since most of the cast and crew paid their bills with their day jobs. This essentially would mean that weekends would be filming days and nights that those who could be there would also be taken full advantage upon. Many actors doubled as gaffers and crew parents would often rise to the occasion by contributing meals like Christy Savage’s mother who did so multiple times. This sense of real community and kinship was the overall unifying factor that I had observed each and every time I had visited the production. The palatable sense that those that were in any way connected to Badass Monster Killer were more than willing to go the distance and beyond in so many ways was surely a testament to the leadership of T.F.O. Productions. These were professionals who wanted to do more than just put on a play and that enthusiasm was indeed quite contagious. 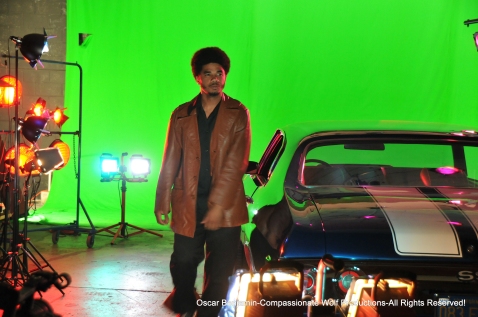 Filming would continue throughout Sacramento’s blistering hot months of summer 2012 and the need to have a strictly controlled indoor filming environment would push the crew to their collective limits. Once each scene was wrapped to director Wood’s satisfaction, the sound of the industrial swamp cooler would dominate the warehouse location as the crew would frantically race to cool the location between takes and set breaks. As the temperature soared during some days, filming would be pushed through the night for the sake and sanity of cast and crew. The sense of community would continue as noted figures such as Shannon McCabe (Sacramento Vampire Ball) would periodically host special craft service events that contributed immensely to the overall spirit of cast and crew.

Production would officially wrap six months after beginning in May of 2012. T.F.O. Productions are made up of individuals who love to have a great time. That was evident throughout all of my visits to the set during production and that spirit manifests itself completely during their private wrap parties for cast, crew and supporters. T.F.O. Productions threw their wrap party on January 27th of the year, 2013. The wrap party serves not only as a way to share stories about the making of the just completed film, but as a way to continue trading idea amid free flowing spirits that crew member all freely contribute to truly create a party all had invested in completely.

The road to completing Badass Monster Killer would not end at the wrap party. T.F.O. Productions would continue events to raise funds to complete the film’s ambitious slate of computer graphics that needed to be realized in post-production. The world that the filmmakers had envisioned in the form of Camaroville in Badass Monster Killer would take up the majority of the two and half years before the film will be seen by the public on December 3, 2015. Producer and cinematographer, Christy Savage stated, “we had only raised half of our original budget. About eighty percent of our environments are CG and Darin ended up doing almost all of the CG work himself! Seriously! Who comes in under budget?” 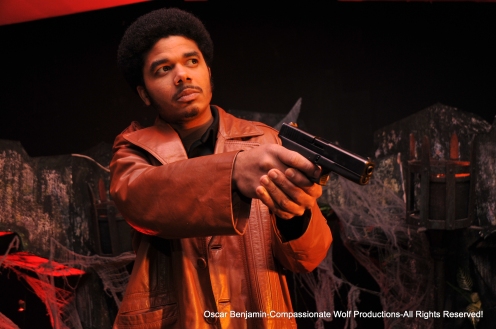 What can we all possibly learn from the experience that T.F.O. Productions had and continues to have from the creation of Badass Monster Killer? T.F.O. Productions’ tenacious belief that they accomplish what so few really can accomplish, an entertaining motion picture is perhaps the first to consider and understand. Organizing and marshaling the collective talents of so many disparate individuals in the hope that you can produce a coherent motion picture is not a walk in the park especially in the creation of genre mash-up with a budget that would not even pay for craft services on most mainstream film productions! Badass Monster Killer is the third full length motion picture that will be released from T.F.O. Productions and continue to demonstrate the growth in both scope and

ambition from this Sacramento based group of filmmakers. T.F.O. Productions are being guided by their collected artistic muses and they passionately follow them to wherever that may be in terms of a premise for each of their films. Is it art or a mere attempt at shameless and exploitative profiteering? Those that superficially look at their films may find them offensive and beyond the pale, but I believe it is more than just an eye of the beholder issue. All of the films that have been released in the past by T.F.O. Productions have shared an honest love of the horror genre and it is cleverly displayed in both Planet of the Vampire Women and Monster from Bikini Beach. There is a healthy amount of gore and nudity in their films, but it is seen as a celebration of those elements that often made the Grindhouse genre of cinema so deliciously taboo. The thrill of placing your hands in a forbidden cookie jar is that priceless sensation which can be watching a T.F.O. Productions motion picture! The raison d’être for a motion picture is to entertain and there can be no doubt that experiencing Badass Monster Killer will fulfill that requirement and so much more. 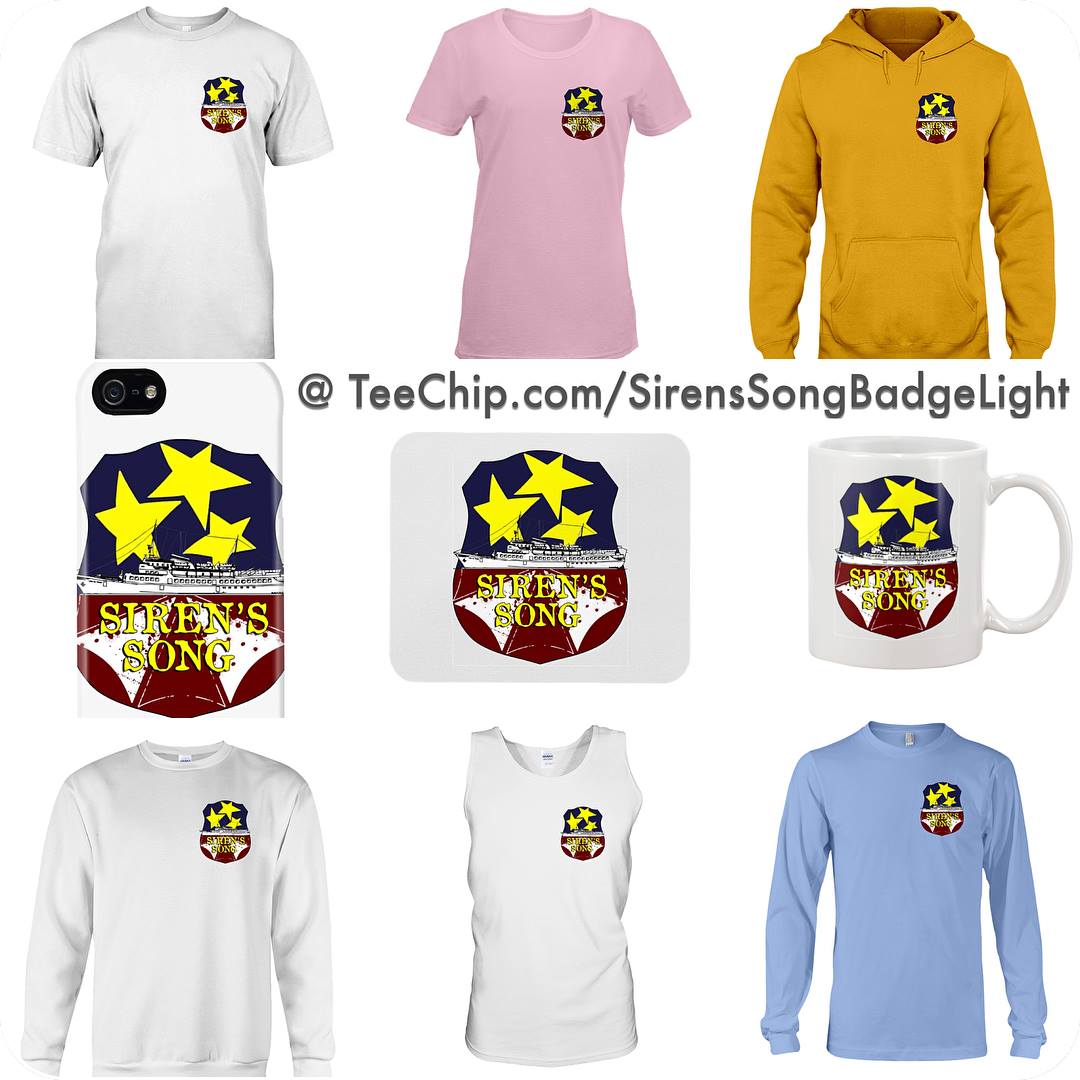